The climate of the Ozark Mountains is continental, with long hot summers and short cold winters. The sun shines 70% of the time in summer, 50% in the winter. The average daily maximum temperature in summer is 32oC and average daily minimum in winter is -4oC. Rainfall averages 1092.2 mm per year and is well distributed throughout the year. Snow falls during most winters, but snow cover ordinarily lasts for only a few days (60 days per year).

The landscape of the Drury-Mincy Conservation Area is typical of the White River Glade Region of the Ozark Mountains, with steep hills dissected by numerous streams. The karst topography has many caves, sinks, and springs. The area is deeply wooded with oak-hickory forest and post-oak savanna, and has extensive bluestem balds (dolomite glades). The glades are considered a unique feature and comprise 35% of the area. The Drury-Mincy Conservation Area also includes two permanent streams and 20 permanent ponds. Within two hour’s drive from BSFS are other habitats, including tall-grass prairie, the Hercules Glade Wilderness Area, Mark Twain National Forest, numerous reservoirs, and the Buffalo River, a national scenic riverway.

Common trees in the Drury-Mincy Conservation Area include oaks and hickories in the uplands and sycamore, sweetgum, and ash in the bottomlands. Prior to fire suppression in the late 19th century, the area included extensive regions of post oak savanna (30%) and dolomite glades (35%). In the absence of fire, the savannas have been invaded by a variety of fire-sensitive woody species, resulting in a closed canopy, and glades have been invaded by red cedars. The Missouri Department of Conservation (MDC) is currently restoring these communities with a combination of cedar removal and prescribed burns.

The glades have thin soils and are dominated by grasses and numerous wild flowers, and contain five endemic species. The savannas have a prairie-like herbaceous understory similar in composition to the glade communities. A sinkhole pond marsh (pond #2) contains the rare manna grass. Other rare and endangered species include giant cane and running buffalo clover. Plants found at the Drury-Mincy Conservation Area are catalogued in the Plant Diversity website.

Common wildlife include deer, wild turkey, migratory waterfowl, and armadillos. The area also includes the alligator snapping turtle and the greater roadrunner. A wide variety of lizards and snakes live on the glades. Federally listed endangered species include the gray myotis bat.

Bull Shoals Lake is a large reservoir, encompassing 45,000 acres (conservation pool) on the border of Missouri and Arkansas. The lake is managed by the U.S. Army Corps of Engineers for flood control and power generation, and is one of a series of five lakes in the Upper White River Basin of northern Arkansas and southern Missouri. Bull Shoals Lake circulates all year, except during summer, when the surface temperature may exceed 30ºC. The lake is clear, moderately productive, and supports a rich warm-water fishery. 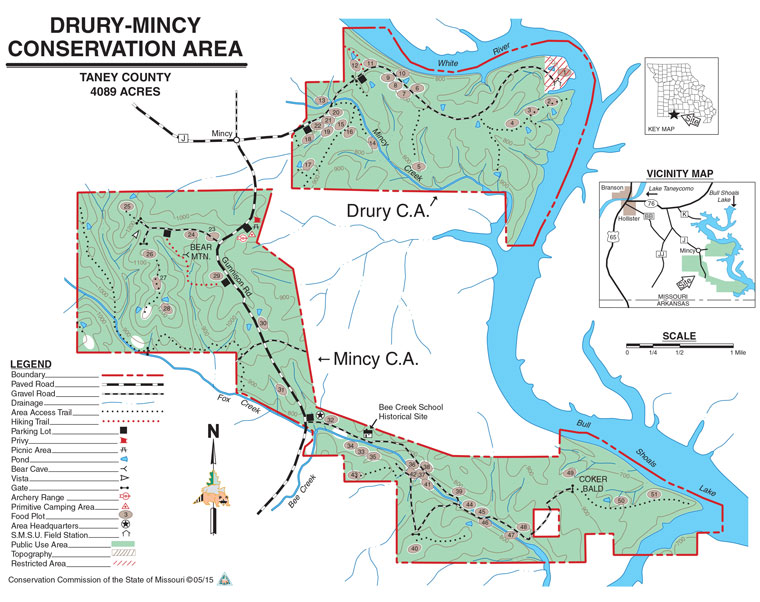